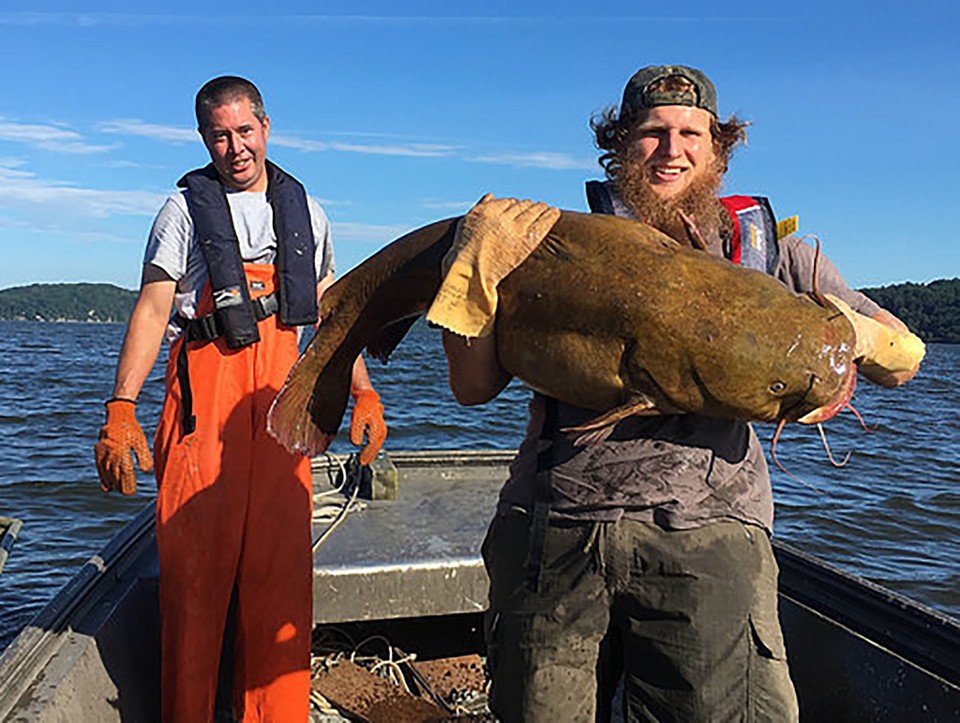 All this rain has not been able to keep the fisherman or the fish away! The Susquehanna River is known for having some of the largest freshwater fish on the northern east coast and today it has lived up to its reputation.

Penn Live reports that a fisheries survey crew from the Maryland Department of Natural Resources on August 30 pulled a 56.5-pound, 44-inch flathead catfish from a hoop net in the Susquehanna River less than a mile downriver of the Pennsylvania-Maryland state line, according to Brett Coakley, fisheries biologist with the department.

That’s more than 8 pounds heavier than the largest flathead catfish recorded by an angler in Pennsylvania.

According to the Pennsylvania Fish and Boat Commission, James Shabrach Jr., of Boyertown, certified a 46-pound-6-ounce flathead that he caught in 2006 in the spillway of the dam at Blue Marsh Lake in Berks County.

The flathead caught by the Maryland survey crew also is heavier than the largest record in the books maintained by the commission, which ranks angler record by the weight of the fish. That was a muskellunge weighing 54 pounds 3 ounces caught in 1924 in Conneaut Lake in Crawford County by Lewis Walker Jr., of Meadville.

While sizes like that have built a constituency among some anglers and river fishing guides for flathead catfish, the fish is an invasive species in most of Pennsylvania and a top-level predator capable of disrupting native fish population in the Susquehanna River and elsewhere.

The 56.5-pound flathead – the largest ever recorded in Maryland – caught by the Maryland survey crew regurgitated a 19-inch walleye when they pulled it into the boat.

The flathead is native to southern and western waters, and in Pennsylvania occurs naturally in the Great Lakes and Ohio River drainages.

Anglers have been introducing the species into rivers of the eastern two-thirds of the state, and the species spreads quickly through its new home, where it becomes the top-tier predator.

The flathead grows to more than a hundred pounds in some southern and western waters, but 20-30 pounds is more common in Pennsylvania.

Following the discovery of flathead catfish in waters outside its native range in western Pennsylvania, including the Susquehanna River, the commission recommended that anglers kill any of the fish they caught. The commission hoped that measure would limit the spread of the species.

However, like most waters where they have been introduced, the species quickly became established in the new waters and the commission removed its kill-upon-capture recommendations.

Flathead catfish are managed under liberal harvest regulations of no minimum length limit, no closed season, and 50 fish per day creel limit.