The renovated basement space at Whitaker Center in downtown Harrisburg will serve as the official practice home of the HU Storm, the university’s 16-member varsity e-sports team.

It’s the university’s latest investment in its e-sports program, in which student athletes compete in popular video games such as “League of Legends” and “Overwatch.”

The training facility expands the university’s total e-sports campus to more than 175,000 square feet. The campus also includes the Whitaker Center’s two theaters, which can seat more than 700 spectators for live competitions.

The next-largest e-sports facility in North America is in Arlington, Texas, according to Whitaker Center president and CEO Ted Black.

With the competitive gaming industry growing across the globe, university officials and local leaders hope Harrisburg will become the e-sports hub in the northeast.

“With cities like New York, Philadelphia and Washington, D.C., surrounding us, we are a great central location for gamers, fans and e-sports influencers,” said Harrisburg University President Eric Darr.

The HU Storm will use the state-of-the art facility for practice and scrimmage matches. University officials also hope the training space will draw hundreds of spectators and players for large competitions.

The focal point of the room is a 17-screen video wall where players can project live-streamed games. The facility is also segmented into competition, practice and teaching spaces.

Chad Smeltz, who moved to Harrisburg from California to lead the university’s e-sports program, said the facility will help his players improve their craft and allow him to attract a strong talent pool.

“Having a space dedicated to practice and learning changes everything,” Smeltz said.

He and Darr are confident that the latest addition to Harrisburg’s e-sports campus will make it a global leader in the billion-dollar e-sports industry.

“We’d stack this facility up against any facility in the world,” Darr said. 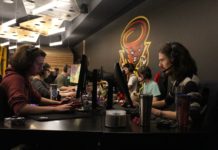