Nassimi Realty LLC, based in Manhattan, bought the mid-20th century, low-slung retail and office complex for $8.7 million on Dec. 24, according to Dauphin County property records.

Kevin Nassimi, vice president of leasing, said that the family-run company was interested in the property because “this is what we do.”

“The agent for the seller brought us the opportunity, and it made sense for us,” he said.

The company specializes in multi-unit retail and currently owns 25 million square feet of shopping center space in the eastern United States, including four other properties in Pennsylvania, Nassimi said.

Kline Village, located on S. 25th Street near the city line with Penbrook, is anchored by Giant Food, which recently signed a 10-year lease extension, and includes a Fine Wine and Good Spirits store, a Rent-a-Center and a Family Dollar, in addition to several other stores, a gas station and a state Department of Health walk-in location.

Nassimi purchased the property for about half the price of the last sale. According to Dauphin County, KOP Kline Plaza LLC, another New York-based realty investment group, bought the complex for $17.3 million in 2004.

Kevin Nassimi attributed the much lower sales price to 10 current vacancies in the 240,000-square-foot complex, including two office tenants that recently left.

He said that a top priority would be finding tenants for the empty space. To that end, the company will focus on signing “discount-oriented retailers” that can offer goods and services to people who live in the area, he said.

He said the company would consider a wide variety of tenants for the empty office space, which most recently was occupied by government agencies.

Kline Plaza was built in 1950 as the Harrisburg area’s first suburban-style shopping center. 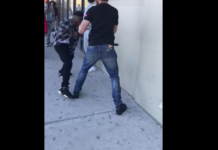