At Crawdaddy’s, you can enjoy a unique menu of Southern Comfort food with a New Orleans flair. 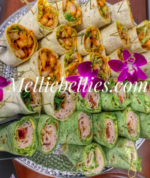 “The fight she showed day in and day out while battling in the NICU is the same fight I have in my heart to not only produce the BEST Southern Barbecue in Harrisburg, PA, but to let EVERYONE see and hear her name through,” according to the website.